Critical Appreciation of P. B. Shelley's THE MOON

P. B. Shelley is considered by many to be among the greatest, and one of the most influential leaders of the Romantic Movement. Of no poet in English, or perhaps in any other tongue, could it be said with more surety, that the pursuit of the spirit of beauty dominates all his work. For Shelley it inter-fused all nature and to possess it was the goal of all endeavour. The visible world and the world of thought mingle themselves inextricably in his contemplation of it. For him there is no boundary line between the two, the one is as real and actual as the other. It is in The Moon P. B. Shelley addresses the basic question of romanticism: what is beauty? How is it enjoyed? The Moon is a superb example that shows that everything depends on the eye of the beholder. What strikes most is the contrasting feature that the poem offers.

The Moon is a brilliant fusion of poetic craftsmanship and skilled imagery. The moon has been compared to two different personae in the two stanzas: a lean and senile body in the first stanza and a lonely and weary lady in quest of a companion. Here is the perception of the same moon by the different personae. The natural object moon is viewed from the bi-colour shades: one diseased and another dejected lover. 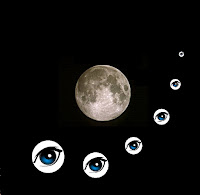 In the first stanza, we find the moon as a personified lady of weak health, lean and pale who comes out of her chamber in feverish trembles. She emerges from a thin veil of clouds in a ‘gauzy veil’. Her insanity only brings her out in the black eastern sky with no romantic appeals but an insipid, shapeless mass of unattractiveness. The slow and blurred visibility of the moon strikes no popular mythical images but of sorrowful suffering:

“And, like a dying lady lean and pale,
Who totters forth, wrapp'd in a gauzy veil,
Out of her chamber, led by the insane
And feeble wanderings of her fading brain,
The moon arose up in the murky east
A white and shapeless mass.”
In the second stanza the moon appears to be more traditional poetic image of lady in love. Here the moon is ‘wandering companionless’. Hers is the lonely image of Ruth in align field of corn. Like the blessed damozel, she is in heaven but with no heavenly peace. Her lover lives in the far beneath the planet earth and she remains busy searching him. Farther, the moon and the stars are different geographical presence is artistically highlighted as having ‘a different birth’. Among the planets and stars, she remains the lonely satellite. She is changing her heavenly positions again and again with joyless eyes to find her lover. She is faithful in love and in her constancy she bids for the lover in down earth. The image of such a lady in love with no real lover is itself a melancholic paint of a lady forlorn:
“Art thou pale for weariness
Of climbing heaven and gazing on the earth,
Wandering companionless
Among the stars that have a different birth,
And ever changing, like a joyless eye
That finds no object worth its constancy?”

It is also to be remembered that the poem begins with a conjunction “and” as if the verse is a continued catalogue of observations. The vision of moon varies from man to man and what strikes the key note is the definition of beauty that it is the compendium of identity with which we are addressed with.
Truly speaking, Shelley is a difficult poet; to follow his meaning with ease and security requires a nimble and poetic intelligence, which comparatively few readers are possessed of. But the main reason why this poem is popular is because it has human interest:  it is filled with the enthusiasm of humanity and embodies his observation of life. We will agree with this judgment and all who care to read the thoughts of a great poet upon many points of high literary and philosophical interest will find a rich treat in Percy Bysshe Shelley’s The Moon.
Ardhendu De